We’re blowing up balloons
and icing the cake
There’s a big birthday party
that we hope you can make!

Intense pleasure is a wonderful thing, demosceners. Your life flashes before your eyes, things that are the most important to you become crystal clear. You start to begin to learn the meaning of life. We closed our eyes and saw Wiklund, Rymdkraft, Ultrasyd and RoccoW, and we realized that they were people brought together not by philosophy, but by necessity. And we started to think, new world order, new world order, where have we heard that? And we remembered in the Good Book of EvilBot it says, 'When the new world order is put on the stage it signals the beginning of an awesome time.' Well, chiptunes are their world, it's what they live and breathe. And if you do not want to enjoy it, demosceners, you've already made a mistake that jumps off the page.

A mix of analog and digital, /KICK is an audio-visual experience from the acid funk jazz underground. Live music and realtime visual effects have been composed with the effort of a worldwide collaboration of composers, artists, and computer programmers. /KICK is a rare gateway to the demoscene digital art community.

Just back from a mission in the international space station where, due to various incidents, he had to land back on earth by himself, Alkama understood what YOLO meant and decided to strike back at Revision 2016 with a new evening liveset ! Dont plan for rest, this ain't for napping. Expect some waves of warm Moog and ARP basslines, hills of melodic Tech House and abysses of Techno. So come howl, put your hands up, throw balloons and dance along, or duck and cover till the storm is over.

Bullet, born lucky in 1975, was able to experience the late 80’s and complete 90’s with all their temptations. He developed a deep love for Frankfurt trance and techno sound which lasts until today. Clubs like legendary Dorian Gray, Omen or U60311 became his second home and shaped the desire to act behind the turntables. In addition to several residents in local clubs performances in the Palazzo in Bingen and Euro Palace Wiesbaden as well as several tours inside Germany fill his biography. He also was resident at one of the first internet radios (cyberchannel.de) during weekly cyber night. Bullet represents and lives for trance and techno sound of the 90s.

Subi still owns the same pair of decks that he bought over twenty years ago, and is likely to play rave and breakbeat hardcore records of the same vintage, even though they’re worn almost transparent with use. He tends not to DJ much outside his bedroom these days, so this is a rare opportunity for all you DJ-spotters to tick off another
number. Actual scratching ability will depend on the temperature on the day and the thickness of the gloves that necessitates.

Mayor has been interested in electronic music since the early nineties. Through MTVs Party Zone, local radio programs and demoscene he established his place in the Finnish dance music scene.
Usually he plays trance, progressive and house music but at Revision he goes back to his roots and plays a set with two Amigas using PT1210mk1.

I began back in 1992 to track some silly tunes on my old Amiga. Rediscovering my old Desire in 2013 and since then back on track exploring new paths in music making the retro or newschool way. Regularly tributing to all those Amiga Legends with setting up little Mixtape-a-like Podcasts of old Protracker Tunes. I love Chiptunes an all kinds of electro / house / trance stuff. Hope 1 or 2 out there like my tracks. To all the Scene guys from the Past and the Present: Keep this thing up, it's amazing (:

Solo-Project of Ludwig "Wick" Leitner, Austrian Musician and Composer. To expand the consciousness of everyone, to wake everyone up from this dream we call reality and having fun making strange music. Chiptune with some rock elements and lot´s of spaaaaaaaaaaaaaaaace. It´s just lando..

Jealous of the fame and glory that h0f, g00b and r0n have been cashing in year after year, Bombe and dojoe decided to go all back-to-back on your asses as well. When they're not fighting over who's hogging all the kudos, they're going to provide you with the finest* dance music available between 128 and 145 beats per minute, from prog house all the way to uplifting trance!

* Fine as defined by the performers' impeccable tastes. Terms and conditions apply. No refunds.

Glxblt is a demoscene musician known to specialize in breakbeat-oriented music. As a DJ, he plays energetic and unapologetically aggressive Drum & Bass. He will once again be joining the party and bringing his courier bag with him, filled with records of the dopest nature! 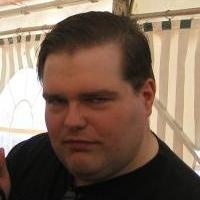 From the Flemish lands he came,
With a van full of flippers and singles to his name,
He's the hero of Revision Party every year,
That might also have something to do with all the Belgian beer.
This year he'll entertain you not just with that,
But also with an awesome 80's curiosa singles set.

The baddest man on the planet

I don't know that I'm a 'self-proclaimed' gangster. I'm from the mean streets of Almere, Flevoland, and I've seen things and been through things that somebody like you, in your little pearly loft, couldn't even relate to. If you're asking me to share stories with you, that are frankly none of your business, maybe I'll give you a couple and maybe you'll take that little smug look off your face. I can date back to when I was 11-years-old. I'm minding my own business and I'm in a park. This guy, a stranger to me, takes a piece of gum out of his pocket. He puts it in his mouth and then he just throws the wrapper on the ground. He publicly litters. And I saw that! I had to see these things at a young age. Sure somebody came along, picked it up, and threw it in a trash can, but for the few moments where that sat on the ground and the law was violated in my neighborhood... We have chaos. We have anarchy at times in Almere. There was years when my father didn't even make a-hundred-grand - or barely made a-hundred-grand - and sure we had a maid, but she only came twice a week. What do you think happened the other five days? You think those dishes washed themselves? You think those clothes got themselves in the hamper?

Mario DJ is out to prove that dance music can be more than simple sounds and melodies produced in an effortless manner. As a longtime DJ with a wealth of experience playing wildly different styles at demoparties but also mainstream music events in his native Poland and abroad, Mario will grace Revision's stage with an extra long set tailor made for the Revision crowd. We expect excessive doses of AMIGAAAA and hope you'll enjoy Mario's performance with a PIWO in your hand and your feet from the floor!

Because, if you don't think it was fair last year, you're probably the same kind of people who wait in line, you wait forever in line, like sheep all lined up, you wait in line, waiting your turn, and then you'll see someone like myself very aggressively cut in the front of the line, and you'll say, "Wait a minute! That's not fair!" And what about ... the parking lot, we've all been there. There you are, patiently waiting for your little parking space, and it suddenly appears, you start driving your car - Oops! Someone zips in, cuts you off, parks their car, and you say "Wait a minute! That's my parking space, that's not fair!" ...

And, forget about waiting in line or the parking lot, what about the fame, huh? What about the fame?! Uh-huh! You scrimp and you save, you work yourselves half to death, and still, you're not as famous as H0ffman? "That's not fair!" It's not fair that some people are rich, and you're not! "That's not fair!" And you know, you have to face the facts, that the vast majority of you are just born with inferior DNA. And you say "It's not fair I'm born with inferior DNA!" But you feel sorry for yourselves, you wallow in your self-pity, and then you have to face the facts, and they say that H0ffman, lug00ber and Ronny will own the afterparty, and not you.